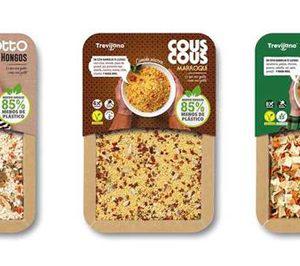 The manufacturer of soups and dehydrated vegetable meals without additives Productos Trevijano, from Mendavia (Navarra), has reached an agreement with Grupo Hinojosa to replace the plastic packaging of these products with cardboard trays from the HALOPACKsystem.

Specifically, Trevijano will use the Halopack by Hinojosa packaging for its soups, dehydrated food and couscous. The brand has already started the distribution of its products in these new packages in some of the supermarket chains in which it is present. Its objective is to achieve sales close to half a million units with this new container during the first year of the agreement.

In previous tests carried out by the brand among its consumers, they have valued its commitment to sustainability and the reduction of plastic. Together, they have also highlighted that the new packaging improves the image of the product, giving it a more premium appearance. In fact, some buyers say that the new appearance of the product has motivated them to consume it for the first time.

Halopack by Hinojosa is a sustainable food packaging system that reduces the use of non-recyclable plastics. Specifically, it eliminates up to 90% single-use plastics. The remaining 10% is the film that insulates the food it contains and it is applied by heat, without glue or additives, so it is easily separable from the cardboard and can also be recycled. This system, in addition, increases the food shelf life, thus reducing food waste.

Hinojosa, which has 15 production plants in the Iberian Peninsula, closed 2019 with a turnover of € 418 million. Its international projection is reinforced by its presence in Blue Box Partners, the European alliance made up of four leading family-owned companies in their respective countries in the Packaging sector, which has about 9,500 employees. In 2018 BBP reached 69 production facilities, 5 paper mills, and a turnover of € 2,287 million.