Ten intrepid Packaging World editors fanned out across PACK EXPO Las Vegas in October in search of packaging innovation. Here's what they found. 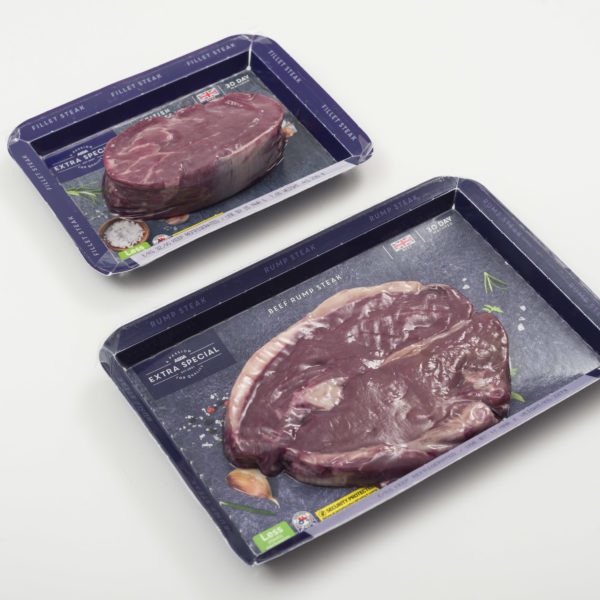 At the Proseal booth it was no surprise that tray-sealing equipment took center stage, since that’s pretty much the UK-based firm’s bread and butter. But the real showstopper from Proseal might have been the demonstration of the Halopack tray, described as the first fully hermetic paperboard Modified Atmosphere Package. Some background first, and then on to news about the first commercial application of this sustainable packaging technology in the U.S.

Halopack is a Dutch firm that holds the patents to this technology. Some time back Halopack partnered with packaging machinery OEM Proseal to boost the commercialization of a more sustainable packaging format for frozen meats or MAP ready meals. The key goal, of course, was to come up with something more environmentally friendly than the CPET trays that have been ubiquitous for a decade or more. By 2018, a number of food manufacturers were putting their products in the Halopak package. They still are, as the concept appears to have taken off in Western Europe. These applications can be one of seven different formats, though MAP and vacuum skin pack might be the most recognizable.

As of this past September, when Proseal set up its booth at PACK EXPO Las Vegas, it had two key Halopack offerings. For commercial suppliers of trays, the Model SK2 can produce up to 120 trays/min. For food manufacturers, however, whose volume requirements are considerably lower, there’s the SKR. Running at about 50 to 60 trays/min, it lets a food manufacturer vertically integrate where tray supply is concerned. The four-station rotary machine performs the following:

• erects the blanks into trays in specialized tooling;

• applies by way of vacuum a layer of film that is a five-layer coextrusion of PE/tie layer/EVOH/tie/PE that clings tightly to the bottom, sidewalls, and flange of the tray;

Especially intriguing is the bit where the film liner is applied to the inside of the tray. Halopack CEO Remi de Olde describes it this way. “We heat the film in the top tool, which introduces energy into the film. This energy allows the adhesive properties in the film to become active. We then pull vacuum through the base tool to pull the heated film down against the board. Then atmosphere is introduced to push the film down securely onto the board.”

Worth noting here is that, in Western Europe at least, food manufacturers using Halopack include in the package graphics a reminder that the film liner can be easily removed so that the paperboard can slide seamlessly into the well-established recycle stream for paper.

Now for the U.S. application of Halopack. It’s unfolding at Homestyle Foods of Twin Falls, ID, a family owned supplier of thoroughly cooked frozen ready meals shipped to consumers who only need to thaw and then heat them in a microwave or conventional oven. In 20 states the meals—all entrees are $6.95 not including shipping and handling—are licensed by the Department of Health and Welfare and are Medicaid approved.

When CEO Cody Griffith of Homestyle Direct walked into the Proseal booth at PACK EXPO, he was looking primarily for additional tray sealing equipment for the CPET

trays his firm had long relied on. But when he discovered that Proseal had an alternative that is so much more environmentally friendly, he decided to give it a try. In addition to installing a Proseal Model SKR to form flat blanks into film-lined trays, he also purchased from Proseal a pair of D10 tray denesters mounted on an OC-Twin Conveyor that leads into a Model GT4eX-Twin Tray Sealing Machine. This tray sealer heat seals a lidstock coextrusion of PA/EVOH/PE to the flange of the paper/plastic Halopak tray.

Homestyle Foods sources the tray blanks locally according to specs provided by Halopack. This part of the whole Halopack proposition is crucial because if the geometry, scoring, and die cutting are not perfect, the flat blanks won’t set up properly in the four-cavity tooling of the Halopack rotary machine. One final observation on the paperboard trays is that Halopack, which owns the intellectual property behind the Halopack concept, charges a royalty per tray.

Material specs for the paperboard tray, the inner film liner applied to the tray, and the lidding material that gets heat sealed to the tray flanges can vary considerably. But in the case of Homestyle Direct, the paperboard is an SBS that is about 0.5 mm thick.